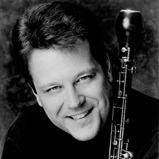 Born in 1963 in Bergenfield, New Jersey, Cary Ebli began his private oboe lessons with Alvin Fossner and then attended the Pre-College Division of The Juilliard School, studying with Lois Wann. His collegiate studies began at the North Carolina School of the Arts, where he was in the class of Vance Reger, and Case Western Reserve University for private study and chamber music classes with Elizabeth Camus. In 1987 he received a Bachelor of Music from the Cleveland Institute of Music, where he was in the class of John Mack. As a concerto competition winner at the Cleveland Institute of Music, he gave the first performance in Cleveland of the Concerto for English Horn and String Orchestra, Op. 137, by Vincent Persichetti.

Mr. Ebli has performed in numerous Canadian venues from Vancouver to St. John’s and has become a Canadian citizen. He has held the position of English Horn and Utility Oboe with the Toronto Symphony Orchestra since 1991, having previously served as English Horn and Assistant Principal Oboe of the San Antonio Symphony for three seasons. He has served as Principal Oboe of the Mexico City Philharmonic and has been a Woodwind Mentor of the Boris Brott Summer Music Festival. Mr. Ebli has been a faculty member of the Eastern Music Festival, returning there in 1996 as a guest artist to critical acclaim. He has given master classes for the National Youth Orchestra of Canada, Wilfrid Laurier University, the University of Toronto, the Royal Conservatory, and the New England Conservatory, among others, and has participated in performances and recordings of the Cleveland Orchestra and the Boston Symphony Orchestra. In 2006 and 2007 he was a member of the Visiting Artist Faculty of the Aspen Music Festival.

In 1997 Mr. Ebli made his TSO solo début with the Donizetti English Horn Concertino under the direction of Jacques Israelievitch and performed the work again in 2007 with guest conductor Douglas Boyd. He performed the Donizetti as well as the Bellini Oboe Concerto with Richard Bradshaw and the Canadian Opera Company Orchestra in 1995 during the inaugural season of the CBC’s « OnStage at the Gould ». In 1993 Mr. Ebli gave the premiere of « In the Stillness of September 1942 » by Brian Cherney with members of the TSO conducted by Sir Andrew Davis, a work commissioned for him by the CBC for the TSO’s Evening Overtures Series. He performed the work again in 1996 with Jukka-Pekka Saraste during the first Made in Canada Festival, in a concert broadcast live from the Glenn Gould Studio celebrating the TSO’s seventy-fifth anniversary season and CBC Radio’s sixtieth. With the Virtuosi di Toronto under its founder Fabio Mastrangelo, he gave the Canadian premiere of the Persichetti English Horn Concerto, performed Samuel Barber’s final composition, the Canzonetta for Oboe and String Orchestra, Op. 48, transcribing the solo part for English horn, revisited the Cherney work in an expanded version for string orchestra, and also played the Mozart Adagio for English Horn and Strings, K. 580a, and the Allessandro Marcello Oboe Concerto in D Minor. Mr. Ebli performed the Mozart Adagio with the TSO and Music Director Peter Oundjian as part of the Mozart@250 Festival in 2006.

Cary Ebli’s solo appearances include « The World’s Ransoming » by James MacMillan under Jukka-Pekka Saraste in May 1999. In June 1999, he gave the premiere of « Five Snapshots » for English Horn and Strings by Louis Applebaum, with the Toronto Senior Strings conducted by Victor Feldbrill. Mr. Ebli edited a revision of the score for the Canadian Music Centre and gave the premiere of this new edition with the TSO and Mr. Feldbrill conducting in 2002. Also in 2002 with the TSO, he teamed with harpist Judy Loman and conductor Christopher Seaman for the premiere performances of Brian Cherney’s « La Princesse lointaine » for Harp, English Horn and Orchestra. Mr. Ebli was oboe soloist for the Opening Gala of the Niagara International Chamber Music Festival in 2004.

Cary Ebli can be seen with some of his TSO colleagues in Jessica Tandy’s final film, « Camilla », directed by Deepa Mehta. He has been a guest on Breakfast Television and CBC’s X-101.