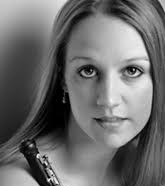 Emily Brebach joined the Atlanta Symphony Orchestra (ASO) as English horn and Oboe in the fall of 2012.

Ms. Brebach holds degrees from Oberlin Conservatory and Rice University’s Shepherd School of Music, and studied with Louis Rosenblatt, James Caldwell, Robert Atherholt, and Robert Walters. She has performed in recitals at Merkin Hall in New York, NY; Reinberger Hall in Cleveland, OH ; and at The Kennedy Center in Washington, DC, where she represented Oberlin Conservatory as part of The Conservatory Project. Locally, she has performed with the Riverside Chamber Players in Roswell, GA.

She is a faculty member of the Atlanta Symphony’s Talent Development Program, gives masterclasses regularly in schools throughout the Atlanta metropolitan area, and also maintains an active private studio in her home. She spends her summers in residence at the Brevard Music Center in Brevard, NC as English horn and oboe as well as artist faculty.

Ms. Brebach, a Philadelphia native, has performed with several orchestras throughout the United States, including the Houston Symphony, Houston Ballet, Sarasota Opera, and The Florida Orchestra. In past summers, she has performed at the Grand Teton Music Festival, the Des Moines Metro Opera, Strings Music Festival (Steamboat Springs, CO), Festival Mozaic (San Luis Obispo, CA), Tanglewood Music Center, and the Aspen Music Festival. Prior to joining the ASO, Ms. Brebach held the position of English horn and oboe with the Sarasota Orchestra.