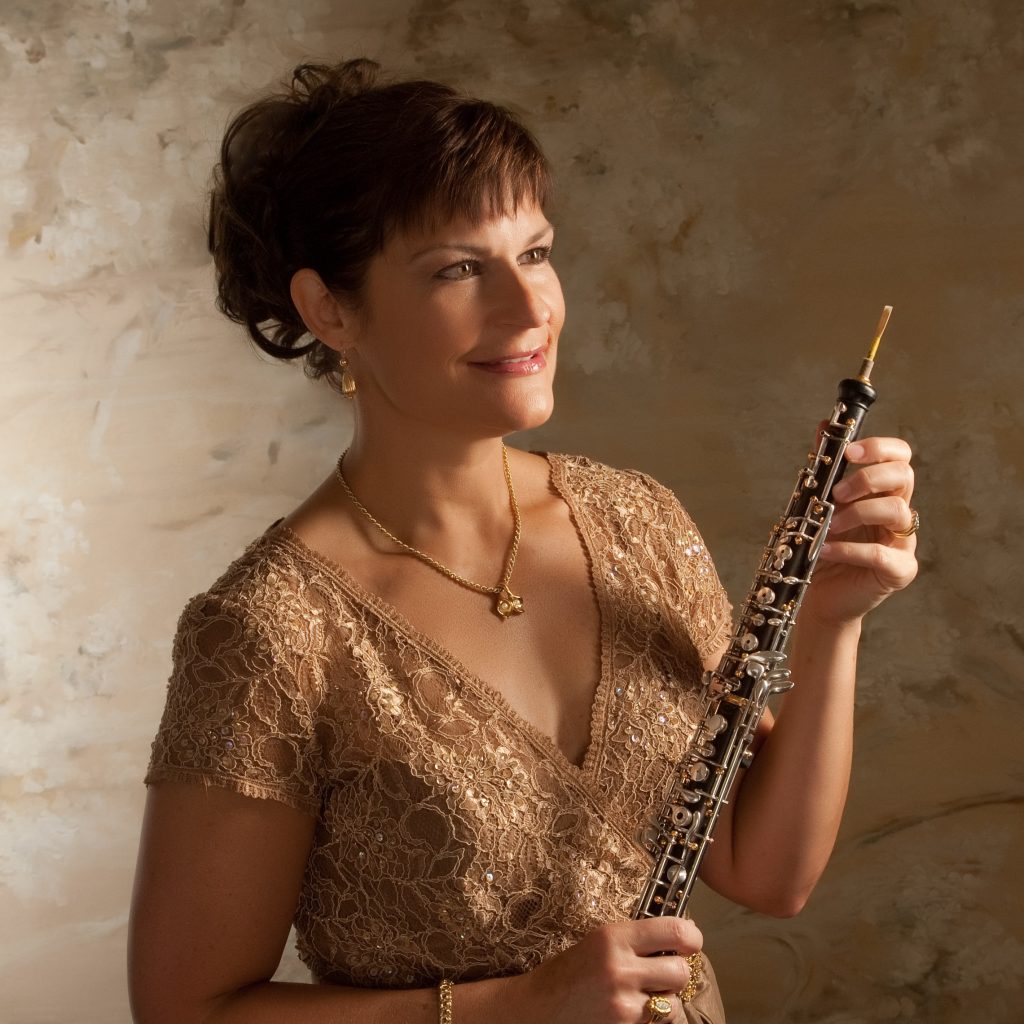 Since joining the Pittsburgh Symphony Ms. DeAlmeida has been featured with the PSO as a soloist in concertos by Bach, Haydn, Vaughan-Williams, R. Strauss, Mozart, and Françaix. She has performed Bach’s Concerto for Violin and Oboe with Vladimir Spivakov, Andres Cardenes, Pinchas Zukerman, and will perform it with Noah Bendix-Balgley in March 2015.

Ms. DeAlmeida has been honored with the commissioning of two oboe concerti for her by the PSO. The first one, commissioned by Lorin Maazel, was composed by Leonardo Balada and premiered in 1993. The following season she recorded it with Maazel and the PSO for New World records. The second PSO commission for Ms. DeAlmeida was written by Lucas Richman. She premiered it in 2006 with the PSO conducted by Sir Andrew Davis.  In 2008 she performed it again with the Knoxville Symphony. A third concerto, composed by Alan Fletcher, has been commissioned for Ms. DeAlmeida and will be premiered with the PSO and Manfred Honeck in June 2015. Ms. DeAlmeida has also appeared as soloist with the Philadelphia Orchestra, the Haddonfield Symphony, the Cayuga Chamber Orchestra, the Concerto Soloists of Philadelphia, and the Carnegie Mellon Philharmonic.

Ms. DeAlmeida is also an avid chamber musician, having performed nine full recitals at Carnegie Mellon University since 1993.  Each summer since 2002 she performs and teaches as a faculty member of the Music Academy of the West in Santa Barbara, California.  Several of her performances there have been featured on NPR’s ‘Performance Today”.  Ms. DeAlmeida has also performed at the Strings Festival in Steamboat Springs, Colorado and at the La Jolla Festival in La Jolla , California.

In November 2002, Ms. DeAlmeida’s first solo CD was released on the Boston Records label. Classic Discoveries for Oboe was hailed by American Record Guide as “a masterly recording… Cynthia Koledo DeAlmeida is simply one of the finest exponents of the instrument anywhere.”  Her second solo CD entitled Mist Over the Lake on the Crystal Record label was released in 2006 to rave reviews: “Ms. DeAlmeida is hands down one of the best players in the world…”  She can also be heard on Crystal Records’ recording of Sir Andre Previn’s Sonata for Oboe, Bassoon, and Piano with Sir Andre Previn, as well as all the PSO recordings since 1991 under Lorin Maazel, Mariss Jansons, Marek Janowski, and Manfred Honeck.  In 2009 Mrs. DeAlmeida was asked to travel to Berlin to perform and record the German Requiem of Brahms with Marek Janowski and the Radio Orchestra of Berlin (RSB) on the Pentatone label.

Teaching has always been a rewarding part of Ms. DeAlmeida’s artistic life. She has been a faculty member of Carnegie Mellon University’s School of Music since 1991, and Associate Teaching Professor at CMU since 2012. She has held teaching positions at Temple University in Philadelphia and Trenton State College in New Jersey, and has also been a faculty member at the National Orchestral Institute at the University of Maryland. She is frequently asked to teach masterclasses at universities in the U.S. and abroad.

In 2003, Ms. DeAlmeida was featured on national television on the CBS “Early Show” in a story relating to the oboe and its remarkable health benefits for asthma sufferers, which led to her work as an ambassador for the American Respiratory Alliance in Pittsburgh.

Ms. DeAlmeida volunteers at the classical radio station WQED in their fundraising pledge drives. She participates in the PSO’s outreach and education department playing and speaking to young people in various venues throughout the Pittsburgh area.