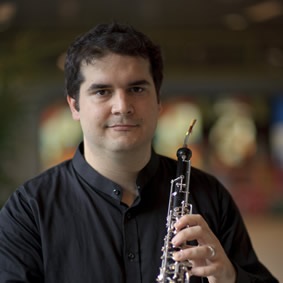 Éric González was born in Ponferrada (Spain) in 1986. At the age of 8 he began studying the oboe at the Conservatory of Ponferrada, where he ended his basic studies with the highest qualifications.

Later he moved to the Higher Conservatory of Music of La Coruña (Spain), where he did the first year of University. After this year his career jumped by winning a scholarship to study at the « Liceo » Higher Conservatory of Music of Barcelona (Spain), where he studied with José Manuel González (soloist in the Royal Symphony Orchestra of Seville, Spain) and took master classes with the most renowned soloists in the world.

After finishing his studies in Barcelona, he moved to Munich (Germany) where he continued his oboe and English horn studies with Prof. Ingo Goritzki, who is considered one of the best teachers of his time and the main teacher of the best principal oboes in the European Orchestras.

Since 2012 Éric González has been principal oboe and principal English horn of the Guiyang Symphony Orchestra (GYSO).